I Have Seen what Has Not Been Seen

Just came back. I needed a shower. Not because I am smelly or I am rotted or I was in Moria camp. I just want to wash off what I have seen to believe that this is not Europe 2017, the lies about human rights and the “dignity of human beings”.
Today, a tent was burnt completely down after an electric contact and how lucky to have everybody safe but how unlucky those who are terrified of that and of the idea?
The biggest regret today was when I was live on Facebook, a giant Greek policeman run like a monster and jumped in the air and hit a young Syrian man with his “hoofs”, feet on his back. There was some chaos at the lunch handing and he took it on a peaceful Syrian guy who was standing doing nothing except looking at what is happening. He continued with his hands after the young man was pushed forward a bit. I had to take the camera away and hide because the police dragged a journalist few days away violently out of the camp. I wanted the world to see what happened and the violence of the police against these refugees. I was shocked to death and if I were out of the camp, I would have confronted this monster and exposed him.
The rain today drove people to the edge and the mood was as muddy as the ground. I will show you a picture of a little child struggling to walk in this mud and there were, at the same time, so many children out.

Last night, when I was leaving the camp, I saw a man sleeping with his legs, from the knees down, out of the small tent and the rain was falling them. At the corner of the camp, next to the prison, the bloody UNHCR stores dozens of tents under the rain while refugees are struggling to find a space to lie down. Many refugees told us that their families sleep in the night and they rest sleep at the daytime as there is no space for everyone and there is no space for more tens except on the most terrible muddy areas.

Yesterday I met a man, a brilliant bright educated refugee. I invited him for a drink out of the camp and he opened up and told me about the last 13 months he spent in Moria. He told me “I lost the trust in everything, in people, in trees, in NGOs and volunteers in the sea in the olive trees and in myself. All what I was doing, I took the bus to Mytiline and came back walking (10KMs). I was able to walk on my own and talk to myself all stories I want to tell and all discussions I wanted to discuss. Myself was very good in listening to myself”. When he was telling me, he was looking at the ceiling despite the admiration and likening of the beautiful kind Greek waitress. “I lost the appetite for love”, he added after contemplating the walls for a while. What kind of words I could tell him except breaking the silence and asking him whether he wanted another drink. He took the new drink from Dimitra and started running his fingers around the top of the glass. I was watching his dark fingernails echoing his dark eyes.
The South Sudanese who shared a caravan with 10 Sudanese and they were all tortured terribly, we have seen the marks. They were tortured by the two governments. Independence did not help as we all can see. These people share the memories of the splitted countries which have two governments and one method of torture. “We are continuing to die here my friend, told me the South Sudanese”. This only reminds me of what the Syrian woman told me yesterday: “We are dying here but slowly”. Yes, this is the title of the long gloomy dark film called Moria. The film which does need a script WRITER or a director. It is a natural film done by the “directors”, the EU government including our government at 10 Downing Street. Asking the South Sudanese what do you need, “A Bible my friend. A Bible”. He was hoping the Bible would protect him from the mud. I am sure so many governments or organisations would have run too fast to offer a Bible had they heard about his request and wishing him a very nice stay after the delivery.
In this place as well, we met several LGBT people. Very nice persons who, imagine, had to flee their countries in the terrible Middle East and some African countries. These people had to flee just because they chose to love in a different way, just they had been taking their right to love. These people are stuck here in this cam, the Moria camp and what is more painful for them, they do not dare to tell stories in the camp. Double persecution and double injustice. When you talk to them they refer to their cases “My problem” if there is any other person from the camp attending the conversation. Of course there is zero space for privacy. These people or some of them are considered “Special Cases” and? They are still here, in tis mud.
I have spent thousands of Euros on providing necessary needs mostly milk and nappies and some shoes for those who have not got any. The painful thing, I left the camp today with the feeling that I have done very little, I have done a “Drop in the Mediterranean”. The need is bigger than my effort and even bigger than even small organisations. The sad story that the Greek authorities prevent NGOs from entering the camp and distributing aids. This does not mean that there are too many NGOs which are ready to do so but I am talking about the law (I mean the lawless). I was very lucky that this is the first time I have had a normal access to the camps but I still distributed the aid discreetly and had the police seen me I would have been thrown out and mostly violently. 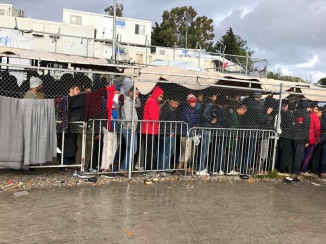 To the entertainment of the children today, they were following me and shouting “Milk, milk” and laugh in a cheeking way. One child called me Mr. Milk. My new nickname. This is mentioned to make some fun but also to mention that these children are deprived in the full meaning of the word. The basic thing is not here and can not be here. I sat today on a stone to watch these children. All of them invented a game, something to pay with. Little children sit on an empty bottle of water and slide downhill. Others, cut off into two bigger water containers, sat in them and other children pulled them. The nice ones was those who sat in vegetable baskets and went down sliding from the top of the hill. I watched them under the rain sliding. Most the time the baskets turned upside down and the children fell out of it, stood up and run to the top of the hill to do it again with beautiful laughter.
The best seen of the day, a little boy maybe 8, have a little dog, tying him to the basket and slide together all over the way. Later I saw the boy and the dog running together out of the camp. They looked very nice friends. He told me “This is my dog”. He took him from the street and he keeps him in the tent. I brought the dog some food too. He deserves too, he live in Moria.