WHEN BOOKS ARE THE ONLY ESCAPE…

Perched halfway up on a hill a few kilometres north of Mytilini, on the Island of Lesbos, stands the One Happy Family (OHF), a community centre for refugees and asylum-seekers from the nearby camps of KaraTepe and Moria. Built to accommodate 3000, more than 6000 people now survive in Moria, in tents and containers.
At OHF one can play in sports, have a Greek lesson or enjoy a proper meal.
And tucked behind the main building there sits a small green truck. Though the paint is a little rusty and the tires deflated, the van offers journeys of another kind to its visitors.

This is the Library Van. Step inside and it is a treasure trove for readers, with some 1,500 titles in over a dozen languages, books and magazines left there by volunteers, refugees, NGOs.
“When I started in September ’17, the van was a mess. All the titles were mixed up, and we were missing 150 books,” explains Dana, the custodian of the place. He points to the ordered shelves. “I organised them by genre, language and reading level. I can find any book very quickly now.” 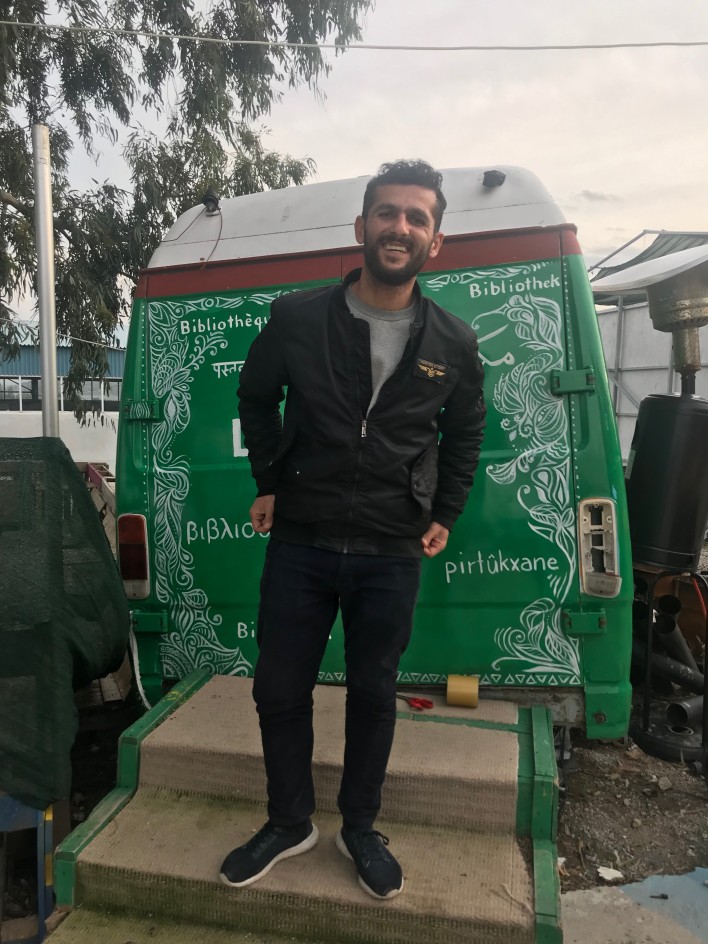 Dana, a 26-year-old man from Iranian Kurdistan, arrived on Lesbos in early 2017 to seek political asylum. “I was living in Moria camp. I started coming to OHF, and got involved with teaching taekwondo. As I love reading, they also asked me to take over the van. Back home, I read a lot of Kurdish romances and historical novels. I only attended school for two years, so I learnt how to read with a friend of my father. He could be quite harsh,” Dana laughs, remembering the slaps on the head he’d get if he had been an inattentive student.
As well as organising the books, Dana set up a system to make sure each title is returned.
“On entering the OHF centre, each visitor is given a few ‘drachma’, a voucher-style currency, to pay for classes, food or a hot tea. The Library’s data system is linked with reception. They can see if you are overdue on a book. If you are, you won’t receive any drachma from them!” he says with a satisfied smile.
A mother and daughter from Afghanistan have just arrived, and the mother is registering with Dana while her daughter hugs a copy of Where’s Wally close to her chest.
They haven’t yet got a registration number at the centre. Dana, patient and helpful, calls a volunteer to take her to register at reception. A few moments later, mother and daughter will leave the van with the book, and smiles on their faces.
Two young men, also from Afghanistan, are waiting their turn. They ask for books to learn English. Dana jumps to his feet and pulls a couple of books from the shelves. He knows where each title is, and what to recommend to whom. He buzzes around, with a purposeful energy, explaining, in English and with his hands, how to use the books.
The young men leave the van happy, a book each under the arm.

Dana himself learned English through reading. “I started with the Cat in the Hat, a present from an American volunteer, Jennifer, who taught me the basics of English. I’ve read it at least 40 times,” he chuckles.
Dana’s second book in English was also a recommendation from a friend, Fantastic Mr Fox. “I loved the cover and a friend told me it was very funny. It was a struggle to read, but I enjoyed it so much I managed to finish it in two days!”
A queue is forming outside the van, and Dana’s lunch is waiting for him on a chair, slowly getting cold.
He continues to speak, plucking books from the shelves. “People use the books to learn new languages. And of course, when they read they can escape the harsh reality and forget their pain for a moment.”
But even reading is difficult here.
“I had a regular borrower who stopped coming. He said it was too noisy to read in the container he shares with seven others, and now it is too cold to read outside. I hope he comes back in spring.”
There is also a lack of books in the most sought-after languages, such as Farsi or Kurdish.
“People are often tired and sometimes they don’t want to read to learn. They just want to read in their native language, simply read for pleasure, read to forget…”
January 2019
Clementine